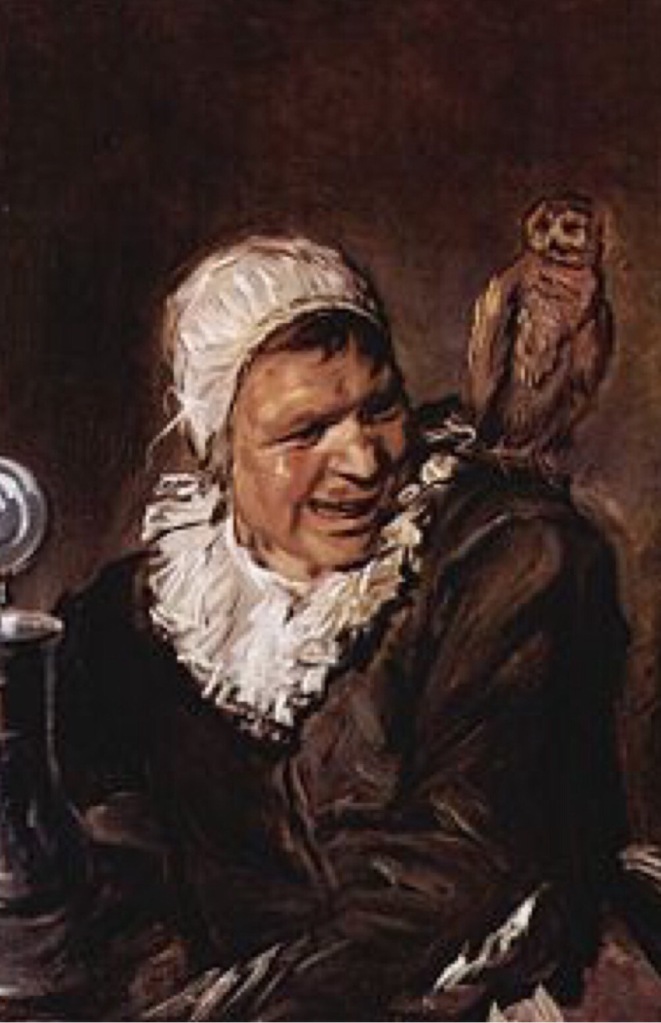 From the golden age of the Netherlands, this genre painting of a crone is also known as The Witch of Haarlem and Hille Bobbe. Frans Hals was an expressive Northern Baroque painter whose rapid brush strokes and vivacity bring his portraits to life. The owl is a motif of temperance and it is likely that this is one of the many seventeenth century Dutch paintings which serve as a warning to be moderate and proper (Jan Steen painted many, especially drunken mothers slumbering across tables while toddlers wreak havoc in the home). There is speculation that the model for this painting was either mentally ill or intoxicated. She is, regardless, a perfect image of the prototypical woman selected for persecution under witchcraft laws in both Europe and America in the late medieval and early modern periods. Single, elderly women, drunk or sober, living alone lacked the protections of family and were easily supected of being non-conformist, unusual, and potentially dangerous. I can’t look at this portrait without thinking of the Goat Woman of Crawfordsville or warnings against my future if I continue to embrace the IPAs of the world (see also: Apple Buzz). A warning to us all. Thanks to the owl. 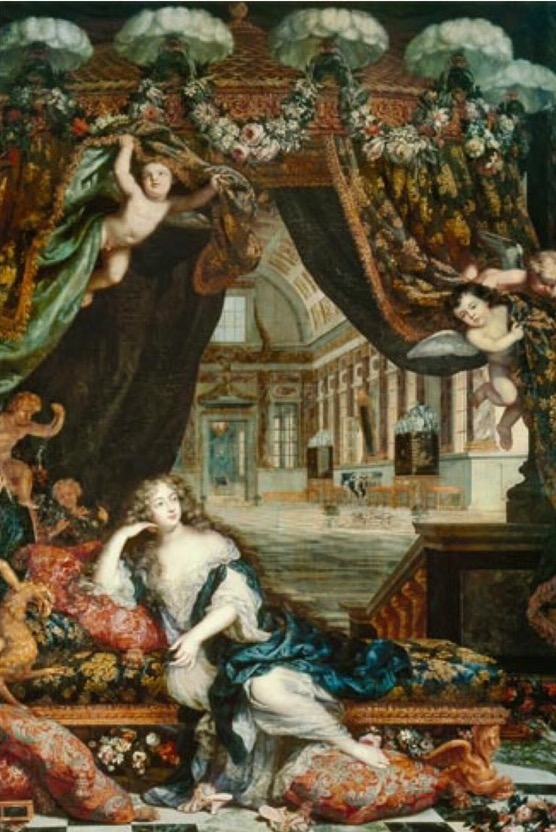 Also from the era of the “theatrical Baroque,” here is shown, complete with dramatic red stage drapery, an adulteress and alleged poisoner. This is the Madame de Montespan, the consort of King Louis XIV of France. This was at the height of the French empire. There was a time during Louis’ reign when the sun did not set on his empire. The empire was never again as large (despite nineteenth century African expropriations) as it was under Louis. And here is the king’s baby-mommy, François-Athenais de Montespan, shown in easy availability: Her bare feet and her sheer night clothes reference her sexuality, as does her loose, curling hair. This is the “undone” François, just as Louis XIV (presumably) preferred her. She bore seven children for le roi and was the king’s preferred mistress until the advent of a slightly younger (and equally pale and thick-necked model), the Marquise de Maintenon. The best (and probably untrue) thing about Madame is her reputed involvement in the Affaire des Poisons, in which she was accused by the French court of poisoning her rivals for Louis’ affections. Much like Lucrezia Borgia and Anne Boleyn, Montespan’s beauty and dazzling success with powerful men was translated by others into rumors about poison, witchcraft, and all the dark arts. But what’s a girl to do when a king transfers his affections and his chateaux to a younger girl? Poison is easy. Love is difficult. And the seventeenth century at the French court is forever orangeries, sheer draperies, indiscretion, cherubs, and red velvet curtains.

What is it with Waterhouse and painting either women by water or women who spin? In this instance he does both: showing the sorceress Circe, who was found by Odysseus’ men at her loom, in the water and using a basin of water as a scrying mirror. Waterhouse was a Pre-Raphaelite painter who painted almost exclusively women, usually mythological or literary, and occasionally biblical (and, has been mentioned, frequently near, in or with water). Waterhouse was fond of re-visiting his favorite “ladies:” he painted multiple versions of the Lady of Shalott, Ophelia, and Circe. And this Circe is wonderfully dire. The intensity of her stare and the highly-saturated greens and blues define a sorceress who very easily could be, as some poets said, the daughter of Hecate herself. Scrying has a long history, going back to Persia, where it is said gazing into the cup would lead to a view of all seven layers of the universe. Nostradamus was said to have used a scrying mirror. The ancient Greeks consulted oracles and bird entrails and all manner of things, but this portrait of hydromancy and feminine power leads one to think that water, and not entrails, is certainly the vehicle of choice for the inner eye. Especially if you’re Circe. And don’t piss her off. She’ll turn you into a pig (or a sea-monster; she does that, you know; just look at the one by her feet). And no one wants that, now, do they? 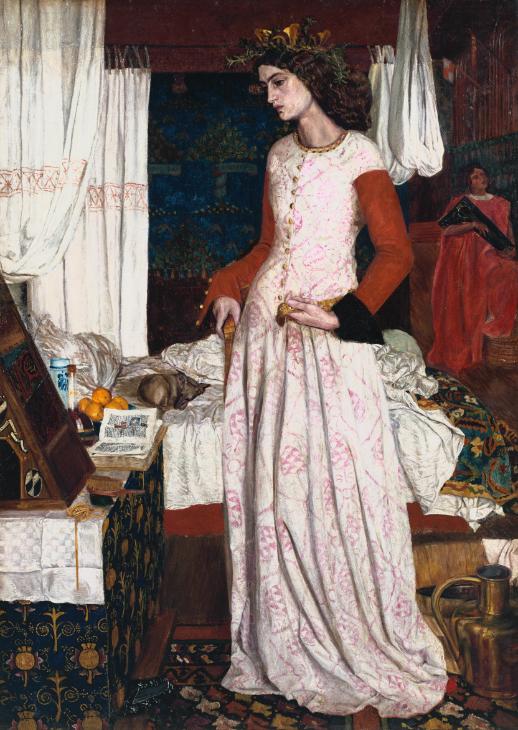 Oh, dear, not only is it another Pre-Raphaelite but it’s also another “easy woman.” Like Montespan and Circe, there is no getting around the sexuality of Iseult here. For starters, she clearly just got out of bed (rumpled sheets, fastening her “un-chastity” belt). There’s a dog, age-old iconographic shorthand for fidelity (Latin: fidelis; hence “Fido.”), in that most unwholesome bed. Iseult was married to Mark of Cornwall, but the bed was rumpled by Iseult and her lover, Sir Tristan of the Arthurian Round Table. In some versions of her story, she is a famous physician who cures Tristan of a poisoned wound; in other versions, she catches her come-uppance when her daughter and namesake ultimately marries Sir Tristan. In most versions, Iseult’s tale is tragic: forced to marry an unloved Mark only to find her soulmate in a Tristan she can bed but never have. Some interpretations of this painting call this Iseult mourning the exile of Tristran from the court of King Mark — there’s rosemary in her hair and the word “Dolorous” can be found in the mirror. For me, maybe this painting is that, but Tristan didn’t just leave or at least not without saying good-bye, if you know what I’m saying. I love this work because Morris gives to the ill-fated Iseult a conscience: sure the sheets are there with all their tawdry innuendo but Iseult’s face is tight and tense and full of contradictions. If her love is clear, her conscience is not. Morris paints not an easily-had accessory (ahem, Gascard!) but a fully-realized, complex, modern adult woman. Maybe it helps that Morris was in love with the model, Jane Burden, who he married the year after he painted this image. Love isn’t easy. Morris idealizes his model and a medieval past but he’s not afraid of contradictions or messy realities. 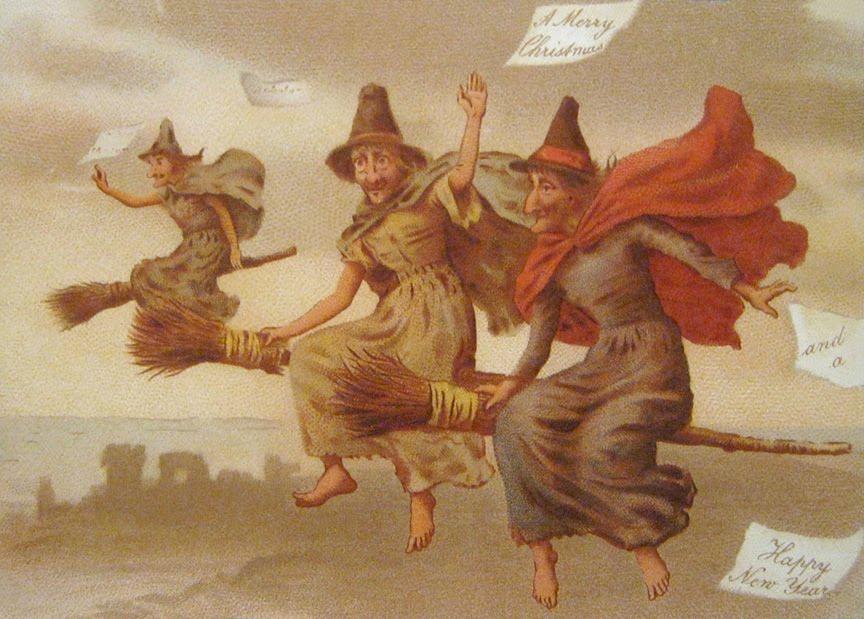 It’s the Nightmare Before Christmas before The Nightmare Before Christmas. Victorians, in all their weirdness, often sent Christmas greetings which included witches or demons (variously known as Black Peter, Knecht Rupert, Krampus, Hans Trapp, Klaubauf, Hans Muff, and Butz). Victoria’s German relatives and the Dutch were also quite fond of this “Naughty and Nice” theme. Sometimes these holiday cards were simply portraits of dead birds,  sadly realistic, depicted on their backs, little claws tagged with a message of goodwill. From the sixth-century Council of Troyes onward, Christianity had declared the Christmas season as a period when supernatural forces could roam the earth. The Pagans had this down first, of course: the equinoxes and solstices were times the veil between the living and dead were thinnest. And so, back to the Victorians and their peculiar Christmas cards, well, the dead birds reminded people to care for the freezing children selling matches and violets in the cold. The nasty spirits and the witches were a virtual Post-It or a ribbon ’round the finger: Count your blessings, keep the faith. Magic is real, both bad and good, and may only the good keep you company in the coming year. (Hey, is that ol’ Malle Babbe on one of those brooms?) 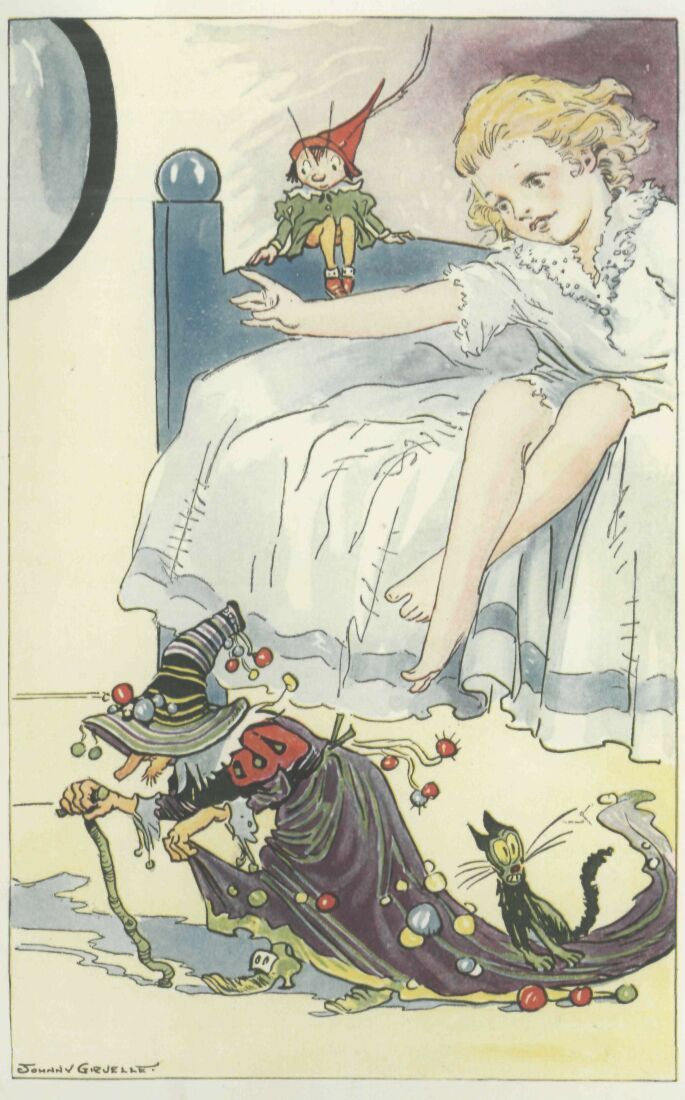 Witches, like fairies and enchanted dolls, inhabit the world of Johnny Gruelle’s illustrations and juvenile fiction. There’s the Wonderful Witch, Mrs. Witch, Winnie-the-Witch; and there’s this little witch, complete with whiskers on her chin and a cat riding on her skirt, traipsing across a girl’s bedroom. Good thing the little girl has a gnome-elf-thing to watch over her, not that this witch looks like she would do any harm, ever. Gruelle’s witches are not so bad; they do not eat children, they do not poison people (Montespan, badly done!); they do not cheat on kings they do not love (Iseult!), and they probably don’t drink as much as old Malle Babbe. If Gruelle’s witches are memento mori like the Victorian Christmas gothics, well, they’re not so very good at it. Mostly, they are simply charming magical alternatives to an early twentieth century world which must have been a little disarming, what with the discoveries of evolution and radiation, atoms, and modern-ish psychology. What terrors came with mustard gas and sudden instant communication must have been softened somewhat by the magical tales being told by Gruelle, L. Frank Baum, and Tolkien. If Adam and Eve had become fish and monkeys, well, the fairies and little people and witches of old were safe and secure. What was science and religion but a mash-up of myth and memory, new and old? Well, and a friendly witch can do no harm. Neither, perhaps, can Planck or Darwin or technology. The spirit will live.

One thought on “I’m Not Bad; I’m Just Drawn That Way: Witches and Poisoners”