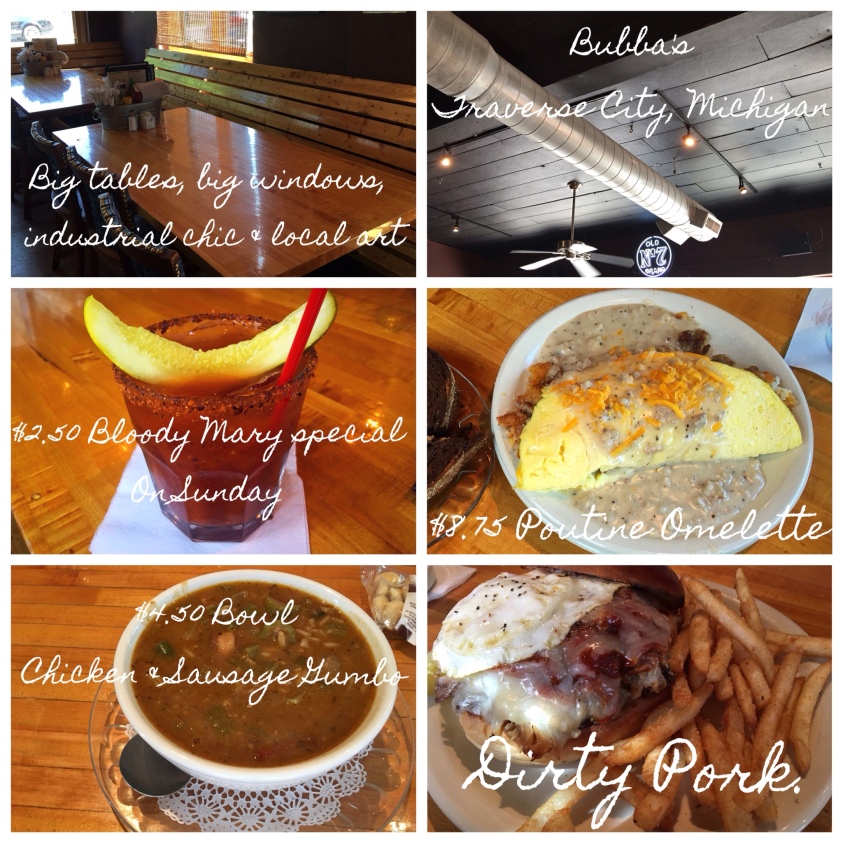 Frequent Dining Companion and I (also known as the “world-renowned food bloggers”) took a spur-of-the-moment midnight trip to Traverse City, Michigan a couple weeks ago. We drove straight through the night (like we were young and everything) and arrived in the morning, realizing we were (a) very, very tired and (b) peckish (mostly me; don’t judge).

Luckily for our hunger pangs and our Sunday morning breakfast needs, we happened upon Bubba’s, snuggled right on Front Street in the charming downtown area. This was especially fortuitous because, as it turns out, the food at Bubba’s is not kidding around. There were so many delicious-sounding choices that we had hell’s own time trying to pick out what we were going to eat.

Bloody Marys were on special for brunch so we figured that would be a good thing to start with while our red eyes adjusted to the morning and while we were making our all-important dining decisions. The Bloody Mary was really good: garnished with what tasted like a very fresh and possibly house-made pickle and spicy grill rub seasoning on the rim, which was a nice touch. FDC and I thought it could have used a little brightness (a dash of lemon juice?), but overall, an appealing if not extraordinary Bloody Mary, and a solid quantity for the low Sunday morning price.

We decided to split a breakfast entree because, as noted before, FDC was not as peckish as I was (and, to be frank, I was not so much peckish as I was wolfishly ravenous). We thought maybe we’d get the Greek Hash (broccoli, roasted red peppers, tomato, onion, potatoes, feta cheese with two fried eggs) or, where my heart was leaning: the Chicken and Waffles, described as “southern style fried chicken, bacon, Sriracha maple syrup served between a homemade jalapeño-cheddar waffle.” SOLD! I said. And then FDC broke my heart in twain by saying he didn’t want that.

We settled on the Poutine Omelette, oozy eggs surrounding sausage, tater tots, cheddar, and then festooned in sausage gravy. Plus we got toast. My disappointment on the Chx/Waf front disappeared almost at first bite of this omelette. We found ourselves saying things like “how did they get the cheese to do that,” “this has to be homemade gravy,” and “oh my god, just oh my god.” I’m not generally a fan of tater tots but these, shoved inside the omelette, were out of this world, melt in your mouth, outstanding. We agreed that the sausage was the star of the show and we would have liked more gravy (as FDC likes to say, he firmly believes gravy is a beverage). But mostly, we were pretty happy with our decision. With the addition of a second order of toast, it was the perfect amount of food for two of us.

Our quick trip to Traverse City progressed, and on Monday morning, we (or perhaps I) thought we’d better go ahead and return to Bubba’s, because, well, chicken and waffles.

Our dumb luck was to get to Bubba’s at 11:00 when breakfast on weekdays ends at 10:45. The server insisted she was not able to coerce the cook to make them at 11:00. (What is it with me and chicken and waffles: I never seem to get them when I want them. See also: Hash House a Go-Go)

I have never been so happy to be told no in my life. I ended up with Dirty Pork, a sandwich so good, I swear I said “slap my ass and call me Sally.” Bubba’s Dirty Pork sandwich is wickedly good. Pulled pork, bourbon barbeque sauce, white cheddar, and fried egg on a Hawaiian bun. (Sally!) I sort of want to weep while thinking about it. Melty, smoky, rich, savory: basically a conversion experience to the religion of all things Bubba. Chicken and waffles? What’s that? Go there and order this sandwich. And even though it will irritate you to pay the $1.75 up charge for fries to go with it, do that too, because they’re amazing (the uber-fry).

Now, FDC was permitted two bites of the Dirty Pork. But he had to then give me two bites of his house-made sausage and chicken gumbo. The gumbo was buttery and really good, not quite as good as getting it in NOLA, but near enough. It needed a little heat, but once we doused it with hot sauce, we were feeling really happy with the gumbo. It’s easy to add the right stuff to the gumbo but getting a “right” roux (really and truly right) is not so easy. Bubba’s missed the heat but they got an excellent roux and the quality of the meats and okra in their gumbo was excellent. Weirdly, even FDC thought the okra was the star of things-swimming-in-roux. And FDC will tell anyone that he does not like vegetables.

If we return to the north, we’ll undoubtedly go back to Bubba’s. I may choose any midnight (tonight, Sally?) and just go. I’m going to try the chicken and waffles there. And then I’m going to have a Dirty Pork sandwich for dessert. (With a Greek Hash and a Twisted Cuban sandwich to go. For later. In case I get peckish.)

Also good about Bubba’s? They compost all natural waste. Local art is on the walls, the tables and windows are large. There is a galvanized bucket on each table stuffed to bursting with all the things any diner might need: napkins, sets of silverware, sauces, and salts and…you get the idea. It’s incredibly welcoming and convenient. Prices are very fair and service is efficient to very good (Sunday great, Monday a bit terse but quick).

One thought on “Slap My Ass and Call Me Sally: Bubba’s Traverse City”